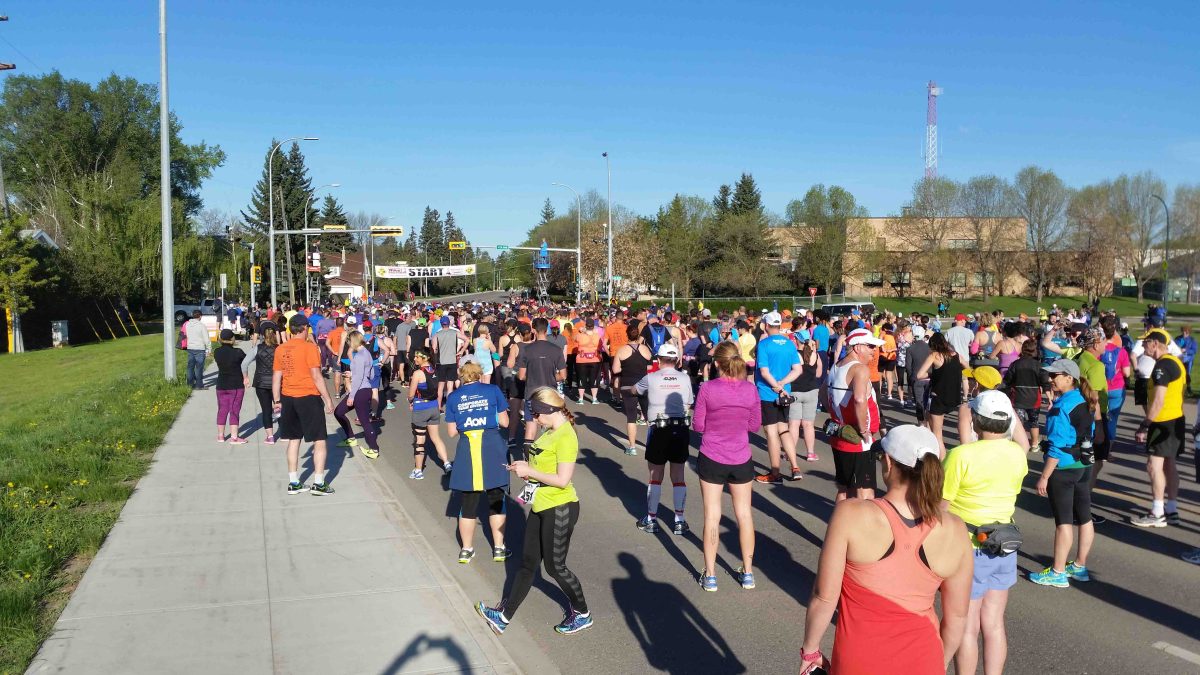 Day one after my second marathon in two weeks. This time, I don’t have to work but I can chill at Jo Anne’s and Doug’s house and rest my legs and feet a little. The weather is beautiful and after having written this blog entry, I will definitely go outside and relax a bit in the nearby park. Such a blessing to have a long weekend off. One of the many upsides of my new job as a Senior Store Manager. 🙂

So yesterday I did my second marathon in two weeks and it felt totally different than the first one I did in Vancouver. But let’s stick to the bare facts first before going into detail. I finished in 3:29, which is a bit slower than my 3:27 finish in Vancouver. However, I still managed to be quicker than 3:30 so the pace was a little better than 5:00 minutes per kilometer. Interestingly, I finished the first 21.1 Km in 1:39 whereas my second 21.1 Km were a lot slower with 1:50. This indicates that my time management could have been better in this race. Bearing in mind that the circumstances of the run were not ideal, I am very satisfied with the outcome. So what about the circumstances of the run? Well, first of all my legs and my feet were still not fully regenerated from the last marathon. And secondly, I made the mistake to do a longer and quite intensive run last Thursday and it felt like I should not have done that prior to the marathon. Anyway, I knew beforehand that my body condition could be an issue in this endeavour and I factored that in. And what about the race course and the weather yesterday? Well, I think that yesterday’s course was not particularly demanding but it was still a bit more difficult than the really convenient course in Vancouver. And the same goes for the weather. Generally, it was lovely yesterday but it got annoying when the sun became really strong and I had to run without any shadow for longer periods. In the end I was fortunate to not get a sun burn but I could feel the skin on my face stretching in the evening. Overall, the conditions of the run were quite good but not as ideal as in Vancouver two weeks ago.

The run itself was a lot more strenuous than the Vancouver marathon and it cost me a lot of effort to maintain my pace throughout the race. While I was still doing absolutely fine after 21.1 Km in the Vancouver race, I already felt leg pain yesterday just after the first 6 Km. So basically, yesterday’s run was all about taking the pain and fighting throughout the race. That is why it wasn’t nearly as enjoyable as the Vancouver run. Another thing that really bugged me was the fact that I had to run alone for a long part of the race. During the Vancouver run I always had other runners in front of me and I could motivate myself to catch every single one of them. But yesterday, there were not nearly as many runners than in the Vancouver run. So after a few kilometers I had noone in front of me anymore and I had to run against the clock. Personally, I think that this is a big psychological disadvantage and it takes a lot of discipline to keep yourself pushing forward although there is noone to catch up to. Then, if you add constantly aching muscles to that equation, you can imagine how hard it is not to slow down involuntarily. Anyway, I don’t want to complain about anything here because it was still a good run and a great experience to me. And also a good training for the Canadian Death Race that I might do in 2018.

After the race, I rested a little while and stocked up on water and fruits. Although they had a free barbeque- stand again, I did not feel like eating a burger after the race. Also, I felt a little dizzy after the race, possibly because I had been in the sun for most of the time. When I felt good again after a few minutes, I got into my car and drove to Jo Anne’s and Doug’s place to chill out for the rest of the day. And since I also had the Monday and the Tuesday off, I could still rest today (Monday) and postpone my drive back to Vancouver to Tuesday.  Better situation than having to work on the day after the race, that’s for sure. 🙂 However, my legs already feel good again and there is only one real blister at my feet so walking is not a problem at all in the moment. It is a little disturbing though that the upper parts of both of my feet seem to be a little swollen and it still hurts when I apply pressure to the largest of the foot bones. I hope this is nothing serious but I guess I will find out more about that in a few days…

Now what is the plan for the future, which major races will I possibly do in the next months? Well, this is my current calendar:

The two highlights in this race calendar are the 50K race in Squamish and the 80K race in Whistler. Now that I feel pretty confident with doing marathons, I might as well try longer distances and these two races offer me the opportunity to just do that. However, I have not yet finally decided which of these races I will do. Since I don’t know how I will have to work on the weekends and how I will feel after the previous races, I will probably decide on doing a certain race just shortly before it takes place.

Now I feel I have written enough about running and races and it is time to conclude this blog entry with my usual music advice, enjoy: 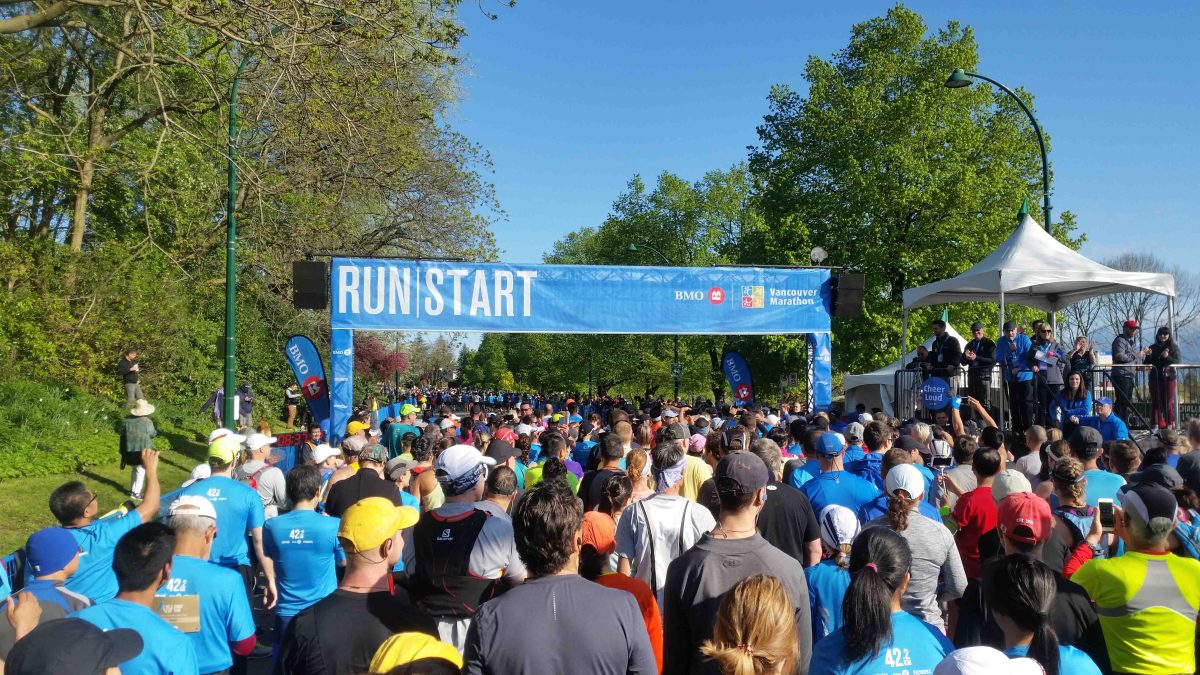 After having done my first marathon last Saturday, I finally found a bit of time to write this blog entry now and tell you a little about my run. First of all, I have to admit that it was a great experience and that it was quite a bit different than running a half marathon. But let’s start at the beginning, shall we?

On Saturday, I rented a hotel room in Vancouver for two reasons: I wanted to be close to the start and the finish line of the marathon and I needed a good place to park my car for a longer time without having to pay ridiculous fees. Also, I still needed to pick up my race package on Saturday so I had to go to the Convention Centre in downtown anyway. After having picked up my package, I decided to see some stand-up comedy at the YukYuks in the evening and as usual, it was a very entertaining show. On Sunday morning, the marathon started at 08:30 AM and the weather was beautiful. The sun was out all day but it was not too hot and the fresh breezes along the way were very welcome to cool down the runners. I really enjoyed the very scenic run and the amazing views on the course. And it was also very helpful that the course itself did not have a difficult altitude profile at all. There were only two minor hills on the course and they were absolutely doable. So in the end, my finish time was pretty good and also a lot better than I had hoped for initially. However, the most amazing thing to me was the fact that I managed to run a quite steady pace throughout the marathon. My time for the first 21.1 Km was 1:40 whereas my time for the second 21.1 Km was only marginally worse at 1:47 Km. When I passed the 21.1 Km- mark, I was a little bit shocked about my time because this time is pretty close to my best half marathon time. So I expected myself to be a lot slower during the second half of the marathon as I had already invested a lot of my energy at that point. Interestingly, this did not happen and I was also able to run the second half relatively smoothly. Overall, I have to say that I really enjoyed running the marathon and it was an aweseome experience.

So how did/do I feel after the marathon? Interestingly, I was and I am doing pretty okay. I had a few cramps in my leg muscles but nothing serious. My feet were really good on Sunday and I had no issues at all. No open blisters, no bleeding spots, nothing. Then, on Monday evening I realized that there were 3 unopened blisters on my toes. I opened all of them and the two blisters on my large toes did hurt quite a bit but they were not the main issue. It was more annoying that I lost my nail on my little toe (right foot) due to the blood blister that had emerged under it. Also, this is the only part of my body that still hurts because of the marathon. But today, it is already a lot better so I can’t really complain. Overall, I had no major issues during or after the marathon so I am very happy that my worst fears did not come true. That being said, I am already planning for the next marathons this year and I am really looking forward to doing some more. I have not yet finally decided on it but I will MAYBE drive up to Red Deer next week and do the marathon over there on the 21st. So tempted to do it but I don’t really know if it is a good idea… Ultimately, it is my goal to run the Canadian Death Race next year and I will have to train very hard to be able to do that. So I may as well keep pushing myself a little more, I guess.

A week prior to the marathon, I went hiking at the nearby Buntzen Lake and this was also a very nice experience. I was hiking together with some very nice people and we had a lot of fun and interesting conversations while we were hiking around the lake. Unfortunately, one of the main trails around the lake was closed for maintenance so we had to take parallel but less scenic trail. Still, the views were quite nice and we had a great time.

This saturday, we will go hiking again, but not at Buntzen Lake. Instead, we will drive to Lynn Valley and hike one of the trails over there. Probably the Lynn Canyon one but we have not yet decided on that.

And what am I doing apart from the running and hiking? Well, I am still climbing regulary and I really enjoy that as well. As a preparation for my first outdoor climbing trip, I will take a lead belay course on May 27th so that I will be able/allowed to climb the more tricky routes after that. After that, Gordon and I will probably start planning trips to Squamish and/or Lake Louise to do some outdoor climbing over there. Exciting developments. 🙂 However, with all the sport activities in my life, there is not much time left for my other passion: the gaming. But I guess that is okay because you simply can’t have everything in life, can you???

Let me share two more nice pictures with you before I will conclude this blog’s entry with the ususal music advice:

The following song is one of the motivational pieces that kept pushing me forward during the marathon. In a nutshell, it is about being “on fire” and reaching out to the great goals in life. It fits my current feeling here in Canada quite well and it really kept me going when I running last Sunday. Hope you enjoy it: